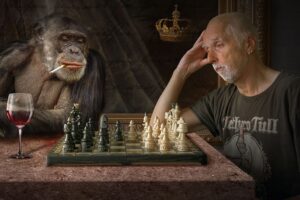 A chess master died—after a few days, a friend of his heard a voice; it was the master!

“What’s it like where you are now?” the friend asked.
“What do you want to hear first, the good news or the bad news?”
“Tell me the good news first.”
“Well, it’s really heaven here. There are tournaments and blitz sessions going on all the time. Morphy, Alekhine, Lasker, Tal, Capablanca, Botvinnik, they’re all here, and you can play them.”
“Fantastic!” the friend said, “and what’s the bad news?”
“You have Black against Capablanca on Saturday.”

A guy comes across an old friend sitting alone at a restaurant table and lost in thought. After a few minutes of talking, his friend said, “My girlfriend told me that if I take part in this chess tournament, then that’s the last straw—she’s leaving.”

Concerned, the guy asked, “So what are you gonna do?”

Dining With A Champion

Two friends were having a conversation:

“So, last night I had Kasparov over for dinner.”

“We had a checkered tablecloth, and it took him one hour just to pass me the salt.”

This website uses cookies to improve your experience while you navigate through the website. Out of these cookies, the cookies that are categorized as necessary are stored on your browser as they are essential for the working of basic functionalities of the website. We also use third-party cookies that help us analyze and understand how you use this website. These cookies will be stored in your browser only with your consent. You also have the option to opt-out of these cookies. But opting out of some of these cookies may have an effect on your browsing experience.
Necessary Altid aktiveret
Necessary cookies are absolutely essential for the website to function properly. This category only includes cookies that ensures basic functionalities and security features of the website. These cookies do not store any personal information.
Non-necessary
Any cookies that may not be particularly necessary for the website to function and is used specifically to collect user personal data via analytics, ads, other embedded contents are termed as non-necessary cookies. It is mandatory to procure user consent prior to running these cookies on your website.
GEM & ACCEPTÈR